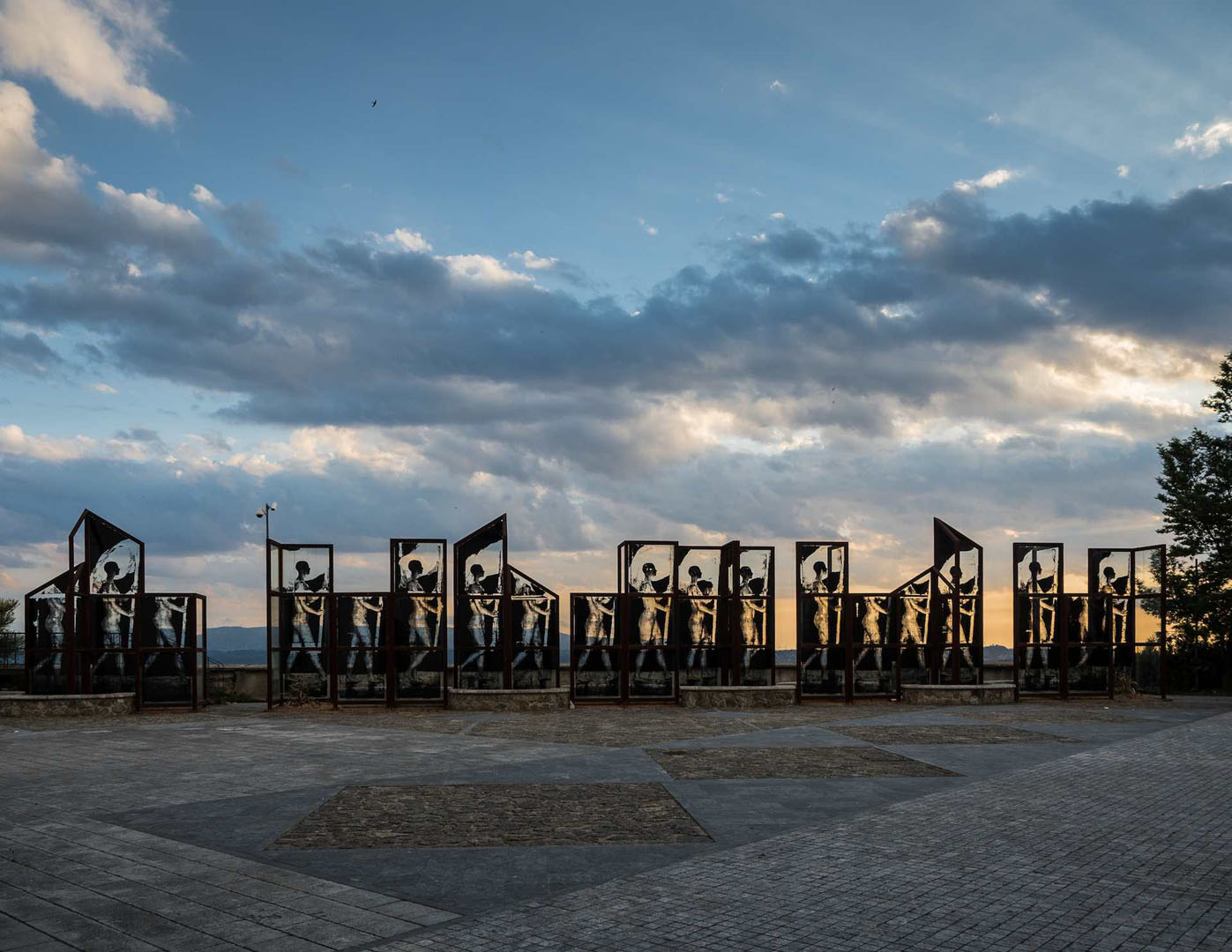 “Aria” by Gonzalo Borondo is the first public work performed for Altrove Festival 4th  Ed – Contemporary Art Centre. A monumental work, as great as its host building, the historical Complex of San Giovanni, has allowed the organization to print 185 glasses in just four days and has permitted the author to refine by hand 73 figures that now return a renewed image to the urban landscape of Catanzaro.

A woman walks in elegance. Naked and proudly raises the empty flag to heaven. The absence of the drape, which for centuries has represented membership and protection for the individual and at the same time boundary and division among the peoples, annuls today its political value and raises an ethical, unitary and collective banner that in the belly of man, in the colors of the sky and in the blowing wind finds the direction of a new consciousness.

The image is essential and primitive in order to invite its audience, during the day,  to approach and reconsider the community, which is bored by the buildings and unable to see and enjoy what nature has already given. The artwork focuses on the landscape, eternal source of life, beauty and diversity though inexplicably devastated by man’s wickedness. At night the glass reflects the lights of the castle whose conquest represented freedom for the fearless people of Catanzaro, at the time renowned all over the world for the quality of its silk and example of democracy and civilization.

The work is in the history of art as one of the most impressive, in a public space, in the field of the silk-screen printing. This is an ancient printing technique whose name derives from the Latin word seri, silk. A long and complex creative process has seen the artist paint and scratch by hand 36 matrix glasses, transformed into looms for printing thanks to the technical, logistical and creative collaboration of Studio 56fili and Studio Superfluo of Rome.

The wind crashes, but brakes and starts again. Mankind should not believe they are able to stop it. Man can’t continue to imagine his life with no respect for the constant innovative power of nature and his migration, without learning from the air and the birds, man himself and other animals. The body of a woman simply filters an even more powerful vision. The outline first drafts new perspectives, then invites the public to overcome it and enjoy the infinite grandeur of the landscape.

It does not mark the border, because it does not believe in its existence. It does not raise walls, but joins under the symbol of a flag common to all men.

The video animation of ARIA is composed of 73 figures photographed at different times of the day to catch different light and then digitally edited to create the movement.

In collaboration with 56Fili and

The intervention is among the most impressive ever made with screen printing technique. Borondo realized with acrylic paint all the figures that realize ARIA on 36 glass panels which have been then transformed by 56Fili, with the collaboration of StudioSuperfluo, in printing frames created appositely to adapt to the windbrakes shapes already present in the sqaure. The printing frames have been brought directly in the square in front of Complesso di San Giovanni to create the screen printing directly in situ. The artist refined by hand all the 73 figures and thanks to the printing technique the whole process has been of 4 days.